You are using an outdated browser. Please upgrade your browser to improve your experience.

How To Write a Pronouncer For Voiceover Recording 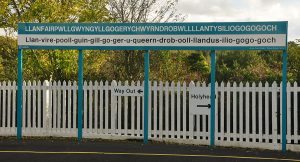 Hard as it may be to believe, when creating a professional voiceover recording it is actually pretty important for words to be pronounced correctly. Crazy, we know!

But yes, it is vitally important that the names of individuals, locations, and companies be pronounced correctly for customer-facing and internal recordings. While there are various methods that can be utilized to retrieve an audio example of the word in question, the simplest way to communicate a tricky name to a professional voice over talent is to write a pronouncer for your voiceover recording.

Write A Pronouncer For Your Voiceover Recording

Writing out a pronouncer for voiceover can be easier said than done, especially when you factor in the multitude of accents that vary from location to location. For the purposes of this article, we will restrict ourselves to examples in US English, but this matter becomes even more complicated when you begin to include global voice over talents whose basic relationship to the innate sounds of letters is totally different from an English-speaking American.

There is in fact an art to visually expressing an audible sound. One of the first steps should be to identify where the EMPHASIS is going to land when the voice over talent reads a particular word. Let’s use the word “emphasis” as an example. In this scenario, we’re talking about a company called “Emphasis Inc”, let’s say.

“Emphasis” is composed of three distinct syllables. “em” “fuh” and “sis”. So, reading that word out to yourself, where do you place the stress? Do you read it as “EM-fuh-sis”, or as “em-FUH-sis”? Or maybe even “em-fuh-SIS”? Where you place the stress dramatically changes the overall effect of a word on a listener.

At Marketing Messages, when we write out our pronouncers we always make a point of capitalizing the syllable that should be stressed. It is a simple, effective way to communicate the thrust of a word to a speaker who perhaps has never encountered it before.

And to back up even further, imagine you ask a voice over talent who is not a native English speaker to read some voice narration about “Emphasis Inc”. You will want the company name to remain unchanged even in a foreign language, so you are asking someone who has never encountered the word “Emphasis” to read it. Who is to say they won’t return audio read as “emp-HA-sis”? Or as “em-PHAS-is”?

To make the pronouncer completely foolproof, you might write it out as, “EM-fuh-sis”. But in writing out that version, I am of course assuming that you reading this say “emphasis” the way I do. Which brings us to our next piece of advice.

When you write a pronouncer for your voiceover recording, it is important to never take anything for granted. You should never assume that everyone will automatically say a given word the same way that you do. It is easy to fall into this trap, especially if you have worked at a company for a long period of time and its related names and terminology have become second nature to you.

But remember, not only does the voice over talent not work at your company, neither does a client calling in. Your office might be located in a town that you have known all your life and so you have never questioned how the name is said. But a customer doesn’t live in your town and does not have the same frame of reference. Having an audio file or Internet example that you can cite is a big help in both writing out the pronouncer and in coaching the talent.

Marketing Messages is based in Massachusetts, and here in New England we have a LOT of town names that people from New England pronounce in ways that make no sense to anyone from literally anywhere else in the country.

Here’s an example, a town not too far from us: Haverhill.
How would one pronounce that town name? Well, us folks in Massachusetts take it as a given that “Haverhill” is read as “HAY-vrill”. But if we were to ask a voice over talent who is NOT from Massachusetts to read that name, they will almost certainly come back with something like “HAVE-er-hill”.

For your assistance, below is a table compiled by NPR to show the way to best express certain specific sounds. For example, “long” is expressed with the same first syllable as the word “law”. In both cases, the sound is represented with “law”. 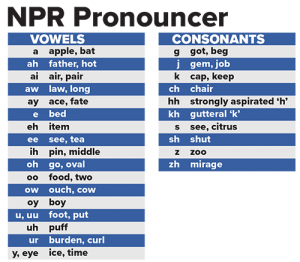